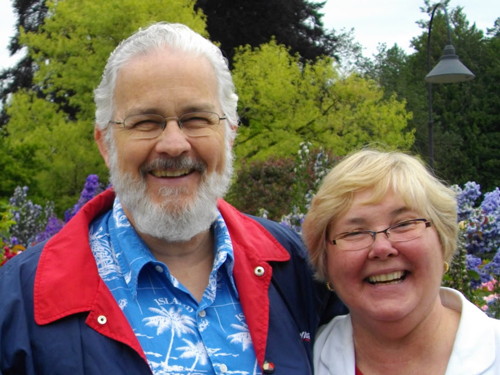 Ministry: Les and Sharon grew up in the Elmira, Ontario area where they were in fellowship at Wallenstein Bible Chapel. They were commissioned as full-time missionaries in 1973 when they first went to Valencia, Spain, serving on a short-term mission team with International Teams then returning to Spain more indefinitely to Zaragoza where they stayed until 2013. Their work over their 40 years in Spain consisted of evangelism, church planting and marriage mentoring and weekend seminars.
They have now returned to Ontario where they live in Elmira and continue to work in Spanish and English as the doors open. They help on a pastoral care team at Wallenstein Bible Chapel and especially care for seniors there. Les gives Bible studies at three seniors residences in the area which are attended by an average of ten each. He preaches twice a month in Spanish at a small church in Kitchener and has multiple opportunities to keep using Spanish.
They have four children and ten grandchildren, three in Spain, four in Iowa and three in the Elmira area. Their son, Chris, is an elder at the church which they helped to start in Zaragoza and grandson Kenny (24), is very active there in music and leadership with youth. Our daughter, Elena, is also very active in Dubuque, Iowa in music and works at Emmaus Worldwide and being mother to four. Our son, Vince, father to three works in the Elmira area and is active in music at his church.

Praise & Prayer:
We remain active in our ministry especially in the following three main areas:
1. Spanish contacts by messaging, etc. Please pray for Mike and Melissa, Hugo and Claudia, Nicolas and Lilly, Colombian couples.
Les will resume preaching in the Spanish church once or twice a month when they reopen.

2. Pastoral team at our local church. Recently we have launched a marriage mentoring ministry with 15 couples being mentored by 15 more mature ones. Pray for this to be effective in consolidating marriages.

3. Seniors ministry and seniors bible studies hopefully will resume soon. We do contact seniors by phone and Internet.